Engine 165, or the engine with the numbers 165 on it, is a 1981 American LaFrance, Century Series, it was retired from our department’s active line of service about 2008. It last served the fire station number 140, in Leona Valley. It is actually a paid call fire station, so it is a call man house. And they took really good care of this fire engine. We were very happy to get it in the condition it came to us in. All we had to do was give it a little bit of cleaning, and it was presentable. 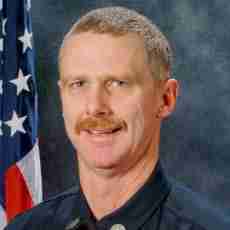 We put the number 165 on this fire engine n honor of Captain Ted Hall, who had been an engineer at Fire Station 165 during part of his career. He, along with his camp foreman, Arnie Quinones, were both killed August 30th, 2009 in the Station Fire.

The crew members of Fire Station 16 and Battalion 13 put a lot of effort into just giving a little bit more spit and polish on this Fire Engine, they painted fittings, loaded hose, and got it looking as nice as they could make it. The Museum used this fire engine in the private funeral services for Ted Hall, as well as the combined service for Ted and Arnie at Dodger Stadium.

Century Series American LeFrance’s are really good fire engines, the Los Angeles County Fire Department had quite a few of them. Out of them all, this one is in great shape. We are very happy to have it. We have another one just like it at the South Gate building, but it is not in quite as good a shape. This one was originally in service, as far as we could tell, at Station 63, so it was originally Engine 63, Los Angeles County Fire Department.