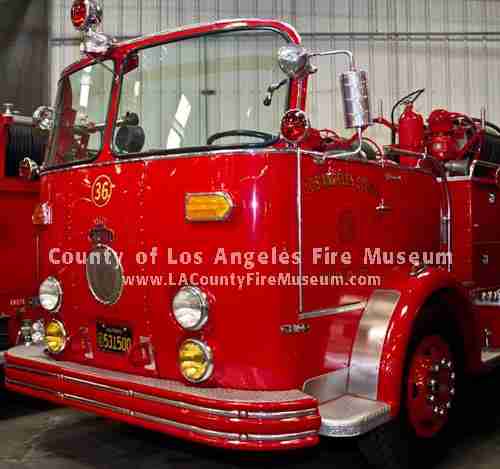 For many years, the Crown Coach Corporation in Los Angeles built high-quality apparatus that the company called the “Royalty of Fire Apparatus.” Crowns were well designed, very durable, and highly maneuverable. In the 1950’s and 1960’s, most of them were powered by 935 or 1,091 cubic inch gasoline Hall-Scott engines. The Los Angeles City and County fire Departments bought hundreds of them. The County’s first Crown was delivered in 1953 and its last in 1976. Crown Coach, also a major builder of school buses, discontinued its fire apparatus business in 1985.

The ’55 Firecoach owned by our Museum Association fell victim to vandals while stored at County Fire Suppression Camp 14. All the glass was smashed, graffiti was carved into its skin, and many parts were broken. In 1996 we were able to move it into secure, indoor storage. Since then, largely due to the efforts of a Santa Monica Firefighter and his wife, this example of the marque has been completely restored.

Originally assigned to Station 44 in Duarte, this engine served as Engine 44 and Engine 244 before being assigned as Engine 270 in Malibu. Its final assignment was to Station 140, a Call Firefighter Station in Leona Valley near Palmdale. Delivered with an open cab its cab later was enclosed by the County Fire Shops. The enclosed cab was removed to restore it to its original configuration, the bodywork and paint were completed and this vehicle is an accurate representation of Los Angeles County Fire Department apparatus in the 1950s. 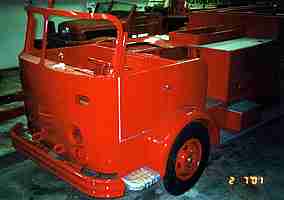 The Crown during its extensive restoration 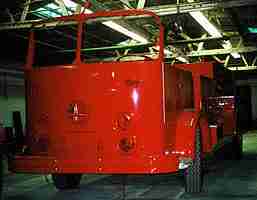