This rig was purchased to provide fire protection for the Yosemite Park and Curry Company in 1937, this faithful Seagrave served in the national park for 50 years.

The Seagrave is still wearing its original paint and has changed little since it was first delivered to Yosemite for service. We are very proud to have it as part of our collection. 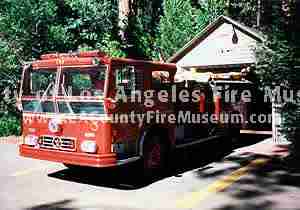 HOW WE OBTAINED THE SEAGRAVE: Originally, our 1972 Ward LaFrance, had been donated to Universal Studios by its manufacturer to serve as “Engine 51” on the “EMERGENCY!” television series. When production of the series ended, Universal donated the engine to the Los Angeles County Fire Department.In 1987. The  Los Angeles County Fire Chief at the time, Chief John England, arranged for the 1972 Ward LaFrance pumper to be turned over to the fire department in Yosemite in exchange for the 1937 Seagrave. He then donated the Seagrave, a beautiful piece of equipment, to our Museum. And, as you all know, Yosemite donated the Ward LaFrance to the Museum so it could return as Engine 51.

The Museum worried for the EMERGENCY! television show’s Engine 51 during the time that E51 was in service in Yosemite. It was number one on our wish list to add to our collection. We were saving a spot for “Engine 51” when she retired from service. In 2008, we were able to park her next to our most popular piece, “Squad 51” when she was brought south.