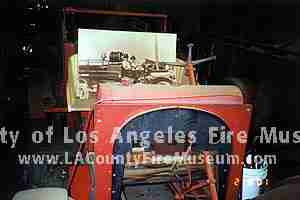 In the foreground is the firewall and fuel tank
of the REO. In the background, resting on the seat,
is a photo of an LA County REO in service.

These engines actually were the product of two companies. The chassis and running gear came from the REO company of Lansing, Michigan (REO stood for the initials of the company’s founder, Ransom E. Olds, who was also the namesake of the Oldsmobile). The REO Model F chassis was then sent to the Obenchain/Boyer Company for the addition of firefighting equipment, including a Hale 350 Gallons Per Minute pump.

During World War II, due to a shortage of parts, the four-cylinder F-head REO engines were replaced with six-cylinder Chevrolet powerplants. The REO in our collection is in need of total restoration. When the time and funds are available to begin the restoration, we’ll have some important in-house expertise. Our Museum president Paul Schneider, and his brother Howard, have already restored a 1922 REO pumper.

We also had the opportunity to observe in 2000, as our then Vice President, Jim Page, restored a 1924 REO chemical/hose wagon (the City of Monterey Park’s first fire apparatus).