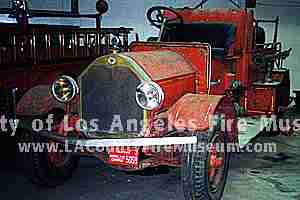 This is one of ten 1000 GPM pumpers purchased by the City of Los Angeles in 1921. Like its nine sisters, this engine has no water tank or chemical tank. It is one of the “gable hood” Seagraves, a style that was discontinued in 1923 or 1924. It is unknown which station or company this rig was assigned to. For many years, it was owned by Malibu resident Bill Armstrong, who operated it as a parade rig. Shortly before he donated it to the Museum, it sat idle in his garage, stuck in reverse. In January 1998 it was donated to the Museum Association. Our thanks to Mr. Armstrong for his generous donation.