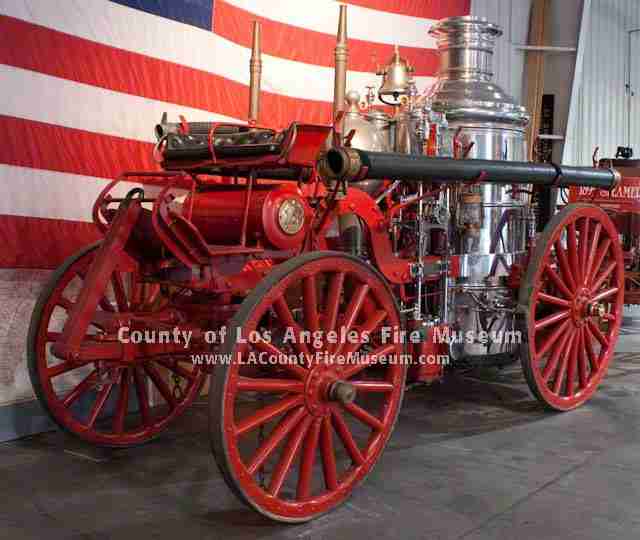 This 1907 American La France Steam Pumper was put in service in Portland, Oregon as Engine 13. The second class steam engine produces 700-800 gallons per minute, and was pulled by three horses. We have very little information on its service in the Portland Fire Department. We are currently researching this. We believe it was retired in the mid 1920s. Where it was from its retirement to the late 1960s or 1970s is unknown.

It ended up in the hands of private collectors. We believe it was purchased by a man named Dan Eagle in the late ’70s or early ’80s. Dan Eagle was a fire engine collector who lived in Spokane, Washington.

Eagle returned the engine to functional condition. Other than functional, his restoration was not an accurately done. For instance, he plated the engine parts in chrome instead of nickel plating. Chrome did not become available until 1928, so anything built before that time would have had nickel plated. He did an decent job of painting it, but he did not complete the gold leafing. The restoration was good enough to have placed it in many events up in the Washington area.

Dan Eagle passed away and his daughter sold the engine to Paul Schneider, who has since included it in the Museum’s collection.

This steam engine, and our 1899 steam engine, were two of the three steam engines we took to San Francisco in April 2006 for the Centennial Celebration of the 100th anniversary of the 1906 Great Earthquake and Fire. We participated in four days of events.

Watch our video about this event on YouTube, it has been embedded below for you.