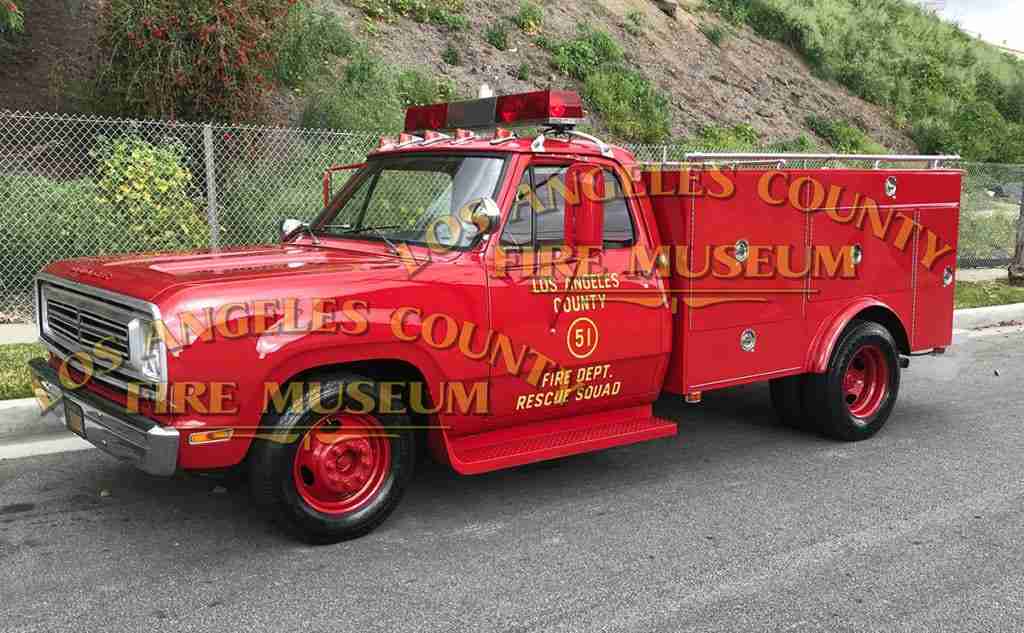 Apparatus ID# A101
We Own This Rig
Manufacturer Dodge
Year 1972
Model Squad
Engine No. 51

Most popularly known as Squad 51 from the Television show EMERGENCY! filmed in the 1070's by Universal Studios.

Universal Studios built the vehicle entirely from scratch according to the Los Angeles County Fire Department's specifications at that time. After the filming of EMERGENCY!, Universal Studios donated Squad 51 to the Los Angeles County Fire Department, and it was used as a reserve paramedic vehicle. The Department presented Squad 51 to the County of Los Angeles Fire Museum Association. It was given a frame off restoration at a cost of approximately $30,000. Squad 51 is now residing with its co-stars from EMERGENCY!, both Engine 51s, the 1965 Crown and the 1973 Ward LeFrance.

Squad 51 with fresh paint set up to be just like it was for the TV show. The wheels and lug nuts were painted red.

This website uses cookies to improve your experience while you navigate through the website. Out of these, the cookies that are categorized as necessary are stored on your browser as they are essential for the working of basic functionalities of the website. We also use third-party cookies that help us analyze and understand how you use this website. These cookies will be stored in your browser only with your consent. You also have the option to opt-out of these cookies. But opting out of some of these cookies may affect your browsing experience.
Necessary Always Enabled
Necessary cookies are absolutely essential for the website to function properly. These cookies ensure basic functionalities and security features of the website, anonymously.
Functional
Functional cookies help to perform certain functionalities like sharing the content of the website on social media platforms, collect feedbacks, and other third-party features.
Performance
Performance cookies are used to understand and analyze the key performance indexes of the website which helps in delivering a better user experience for the visitors.
Analytics
Analytical cookies are used to understand how visitors interact with the website. These cookies help provide information on metrics the number of visitors, bounce rate, traffic source, etc.
Advertisement
Advertisement cookies are used to provide visitors with relevant ads and marketing campaigns. These cookies track visitors across websites and collect information to provide customized ads.
Others
Other uncategorized cookies are those that are being analyzed and have not been classified into a category as yet.
SAVE & ACCEPT
Skip to content