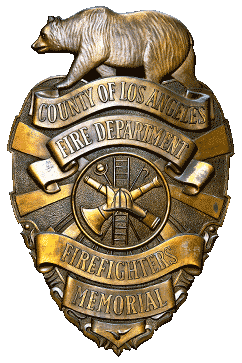 December 18th will always mark the anniversary of the line of duty death of Fireman/Paramedic James W. Michelli. Jim died battling a fire at Case’s Stereo shop in Baldwin Park while assigned to Squad 29. He left behind his parents and his wife who was pregnant with their first child. Jim’s Captain, Lyle Burkhardt, sent us the included newspaper articles. The conditions of the incident that Jim died in, the building and the fire, are both still very common to encounter today. Jim’s death was attributed to a flashover in the overly stocked stereo shop. A fine, aggressive and well liked fireman doing what he loved. Take a moment out of your day to remember Jim and those he left behind and to be reminded that the job we love can suddenly take us from those who love us. Lest we forget!

Written by President Paul Schneider in 2019 for the 40th anniversary of the incident. 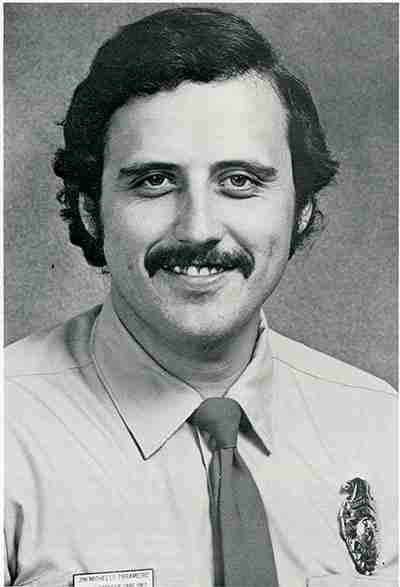 This edition of the Nozzle is dedicated to the memory of Firefighter James Michelli. Brother Michelli was killed in the line of duty fighting a fire in a commercial occupancy in the city of Baldwin Park. The loss of Jim has been deeply felt by all members of our department who know him and by all of his friends.

Jim was a very special person. He approached everything he did with contagious enthusiasm. Jim was an excellent Paramedic who enjoyed helping people. He was a very aggressive firefighter and was always willing to do that little bit extra around the station. A very active person. Jim was a member of the County baseball team for many years and had accepted the thankless job of coach for the 1979 season.

I hope and pray that Jim’s death is not meaningless. It cannot be emphasized enough the risk every firefighter takes entering a smoke-filled, unventilated structure before adequate ventilation has been accomplished. If every firefighter took an additional moment to consider his actions, the lesson learned by Jim’s tragic death might save the life of another firefighter.

Jim’s funeral was a wonderful expression of brotherhood. The funeral was attended by more than 1,000 people; several hundred of these were uniformed members of the Los Angeles County Fire Department. many others attended representing departments from the San Gabriel Valley and the Los Angeles Basin. Several police organizations were represented. The funeral procession was miles long with sixteen pumpers, two truck companies, dozens of chief cars and police sedans – all units with emergency lights flashing – and miles of private autos. The procession passes along the route with Fire Engines and crew standing at attention at strategic points. Anyone seeing the procession knew, indeed, that a firefighter had died and was being honored by those left behind. a flyby of our department helicopters at the grave site was the final salute for our departed brother, Jim.

Jim leaves his wife, Patty, who is pregnant with their first child and his father and mother who live in Azusa. 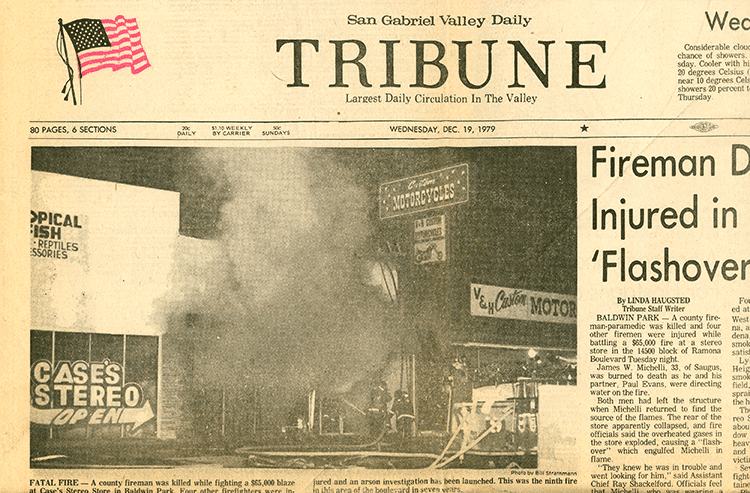 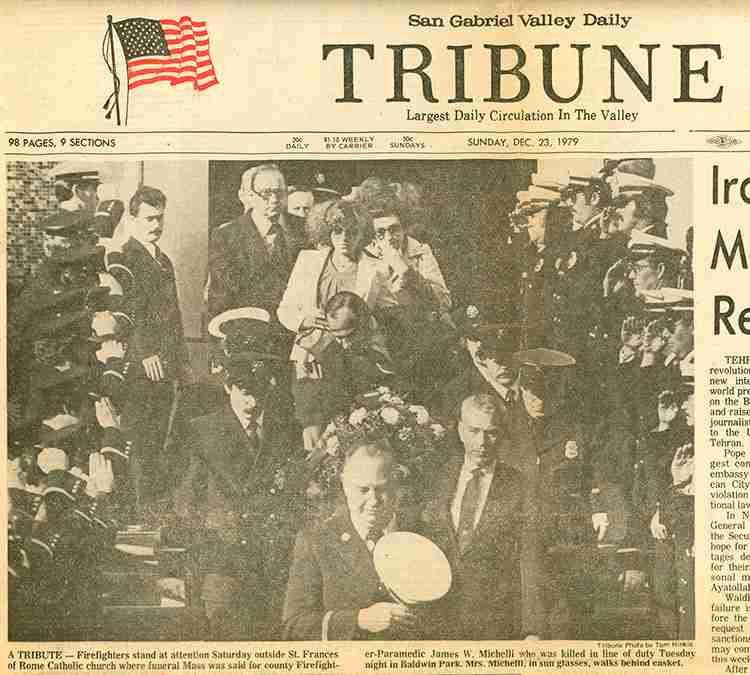 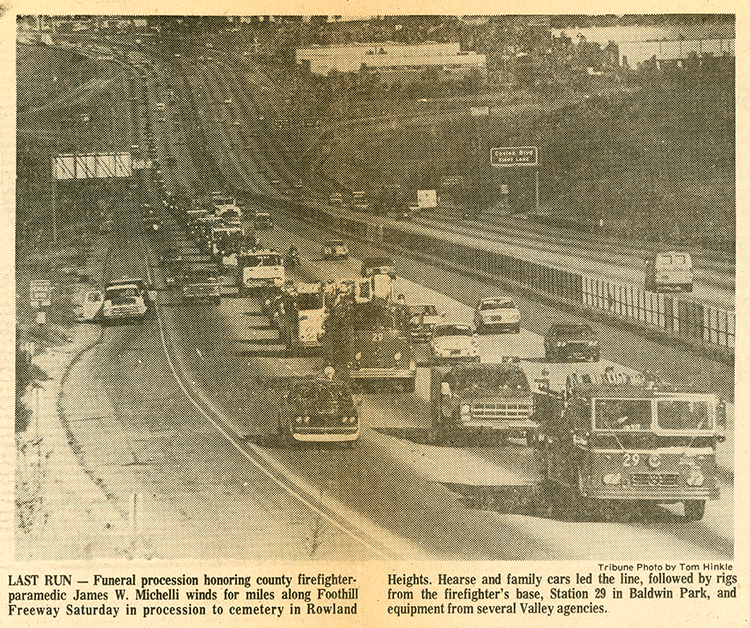 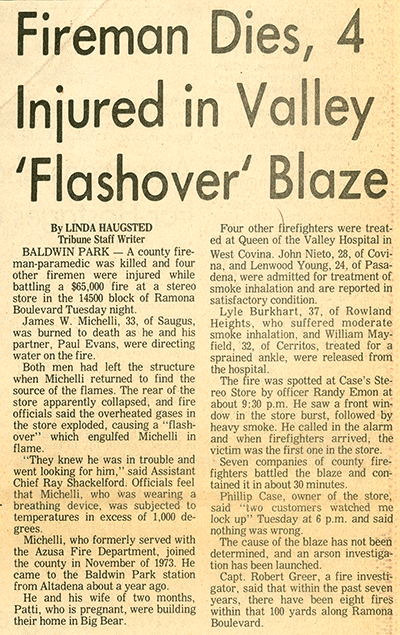 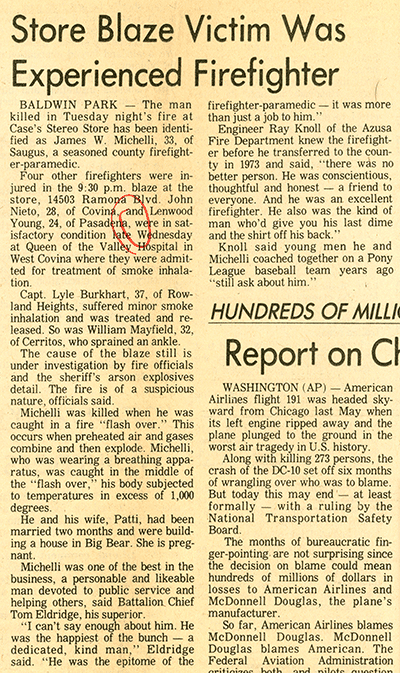 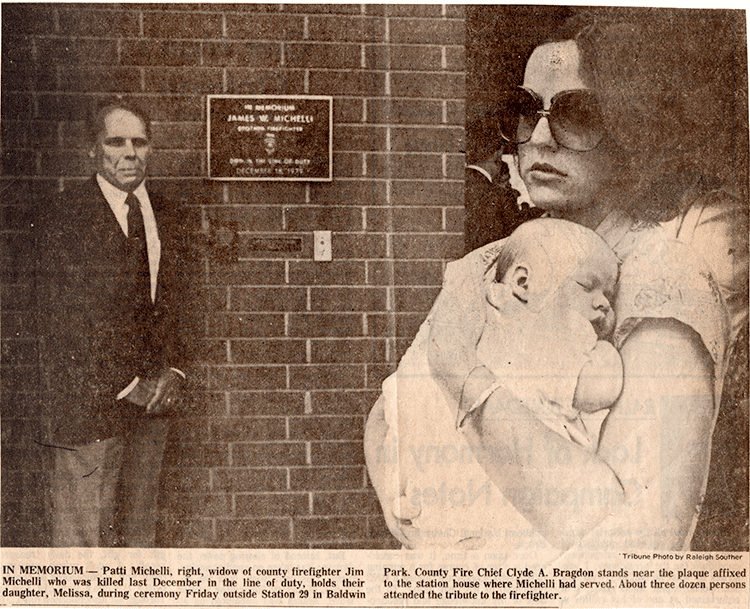 The Newspaper articles of Chief Bragdon and Patti Michelli are part of the Museum’s Chief Clyde A. Bragdon collection, Doc 0063 is the image. The newspaper article about the image is Doc 0064. They are from the June 28, 1980 edition of the San Gabriel Valley Daily Tribune.

It was a simple tribute Friday to a fallen comrade – Los Angeles County Firefighter James W. Michelli, killed last Dec. 18 while battling a blaze at a Baldwin Park stereo store.

Men throughout Michelli’s Battalion 10 donated to a memorial plaque which was unveiled by county Fire Chief Clyde A. Bragdon Jr.

The firefighter’s wife, Patti; their new-born daughter, Melissa Ann, and his parents, Bill and Mary Michelli of Azusa, attended the ceremony in Baldwin Park and were joined by city officials, representatives of the Baldwin Park Police Department, the CHP and the Azusa Fire Department, where Michelli had served before joining the county agency.

Fire department chaplain Capt. Bronelle Greer read a poem and then Jed the invocation, saying “a good man’s memory is blessed.’! Said Bragdon, “Jim is gone but he’s not far away and his fellow workers will not forget him.”

When the plaque was unveiled, everyone stopped, slowly reading the inscription “In Memorium, James W. Michelli, brother firefighter killed in the line of duty Dec. 18,1979.”

Bragdon also read a list of resolutions adopted by the board of supervisors and the state legislature and then kissed Mrs. Michelli on the cheek.
Michelli died inside Case’s stereo store when preheated gases “flashed over” and enveloped him in fire. Other firefighters were injured and Michelli never had a chance according to those who worked with him.

He was remembered as an outgoing person with a love for living and helping youth. And, as an excellent firefighter-paramedic.

The fire at Case’s was deliberately set but no suspects have been arrested, according to arson investigators. Mrs. Michelli now resides in Saugus. 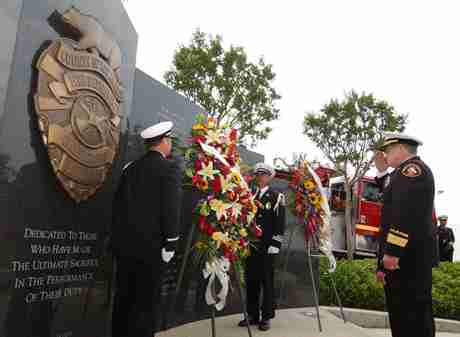