THE MOST INFLUENTIAL TELEVISION SHOW DEDICATED TO FIREFIGHTERS

GO HERE TO SEE INFORMATION ON THE 50TH CELEBRATION EVENT

SEE THE RESTORATION STORY OF THE AMBULANCE USED IN THE SHOW

The Los Angeles County Fire Museum is the home for the “EMERGENCY! TV Show” apparatus and most of the main artifacts from the show. This section is dedicated to the show and the stars that are still loved by fans. We have restored the Squad and the Ward LaFrance Engine. In September of 2020 we are starting the restoration of the 1970 Chevrolet Ambulance that was in quite a few episodes, but will be remembered most for the Season 3, Episode 21, originally shown in February 1974 when the ambulance, with Roy inside, is involved in a traffic accident caused by a drunk driver. This restoration is being documented as shared as it occurs. See that process on the AMBULANCE PAGE.

We are building out this section of the site to share more about the show, the apparatus, the artifacts, and stories about the show.

(Text is from the 2005 Los Angeles County Fire Department Historical Yearbook, pages 242 and 243)

By far, the most influential television show dedicated to firefighters and rescue personnel was the 1970s phenomenon known as “EMERGENCY!”. This series not only helped to promote the paramedic profession to the general public, but it was also single-handedly responsible for the recruitment of countless men and women into the fire service. An entire generation of firefighters grew up watching the adventures of “Johnny and Roy,” and many of them credit the television show with motivating them to choose their careers in public safety. 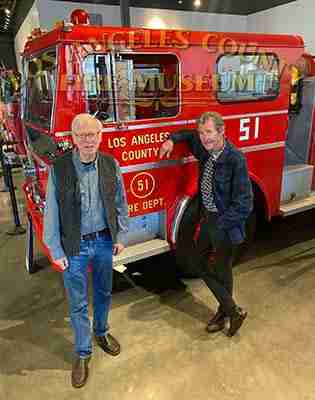 Engine 51 with Kevin Tighe and Randy Mantooth standing in front of the drivers side door. Taken inside the Museum in 2020.

​Beginning in 1969, at Los Angeles County Harbor-UCLA Medical Center (known as “Rampart Hospital” in the series) paramedics began Advanced Life Support (ALS) training for Fire Department personnel. In the latter part of that year, Los Angeles County Squad 59 went into service, with a nurse “ride-along” giving birth to the first County paramedic squad. Not until July 1970, when California Governor Ronald Regan signed the Wedworth-Townsend Paramedic Act into law, were paramedics allowed to handle ALS calls without the assistance of a nurse ride-along.

In 1971, the Los Angeles County Fire Department operated three paramedic squads in service throughout the County. The first, Squad 59, was based at Harbor-UCLA Medical Center in the South Bay city of Carson. This location was to become the backdrop for the hospital parking lot scene throughout the entire series. The other squads in service were Squad 18 in Lennox and Squad 36 in Carson, located near Station 127, the real-life station known as “Station 51” in the series. Arguably the most famous scene from the series is the “roll-out” of Squad and Engine 51, making a left hand turn onto the streets out of Fire Station 127, set against the backdrop of freeway traffic.

Toward the latter part of the summer of 1971, newly promoted Los Angeles County Battalion Chief James O. Page asked Hollywood producer Robert Cinader to ride along with him on medical emergencies to observe the new paramedics in action. Quickly, Cinader realized that a television show based on the Los Angeles County Fire Department’s paramedics was a goldmine idea. By November, filming had begun for the two-hour pilot.

Battalion Chief Page continued to serve as the Fire Department’s technical advisor on the series and even reviewed the ”dailies” for the show to offer suggestions to ensure the accuracy of the show and to preserve the image of the Department. Los Angeles county Engineer Mike Stoker and Fire Captain Dick Hammer appeared regularly in the show along side actor Tim Donnelly, who played the part of Chet Kelley.

The series ran until September 1977 and ended with 124 episodes under its belt. The series was produced with the full cooperation of the Los Aneles County Fire Department, the Los Angeles County Department of Hospitals, the County Board of Supervisors and the Department of Health Services. The series continues to educate the public on the value of the paramedic program and can still be found on cable and satellite television channels throughout the world.

In August 1995, Universal Studios immortalized Station 51 with the dedication of an actual Los Angeles County Fire Station 51 on their backlot. This decision was made in response to the Universal Studios backlot fire in November 1990, which burned a major portion of the studio property and resulted in millions of dollars in losses. This fire has been labeled as the largest fire in the history of Los Angeles.