THANK YOU to all who consider donating to the Los Angeles County Fire Museum, a private 501(c)(3) non profit corporation, #33-0294056. The Museum also accepts any Los Angeles County Fire Department artifacts. When it comes time to clean out your home, please consider the donation of your artifacts; photos, badges, helmets, uniforms, etc. The Museum will care for them and prepare them to be shared for research purposes and display to the public. These artifacts help to tell the story of the people who make up the Department. Share your story or that of your loved one by your donation, or dedicate your donation to a special project in the Museum.

$2500
National Association
of Emergency Medical Technicians
In recognition of the 50th Anniversary
of EMERGENCY!

In Memory of Sadie E. Mantooth

$1000
Chief Clyde Bragdon
For the great work by good guys!

For the Tire Machine

In Memory of James O. Page

$560
Colleen K Burks
Thank you for showing
the EMERGENCY! pilot
on it’s the 50th Anniv.

Back in 1998 Howard and Paul Schneider heard there was a steam engine sitting around Knott’s Berry Farm. It took 30 years, but with constant contact and coercing, the apparatus was donated to the museum in 2014. Thank you Knott’s Berry Farm and especially to Marta, an executive assistant at the park. We brought home a Waterous steam engine, year unknown. We think it is from around the late 1890’s. The research has begun!

Read more about the Waterous and the years long story in the 2014 issue of the Fire Warden. 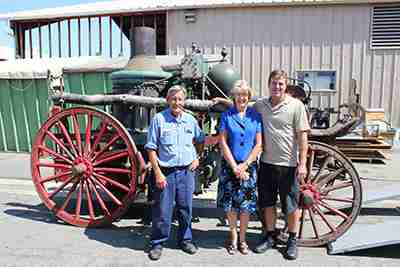 THE WATEROUS ARRIVES AT ITS NEW HOME 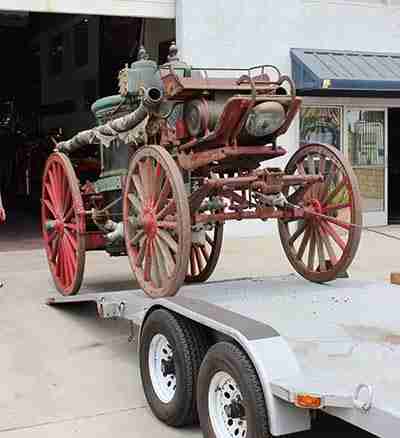 BP ARCO Donated a 1941 Ford fire engine to us in the early 1980’s. It had served the Arco refineries for years, and it continued its work for the Museum in musters and as a tow vehicle.

The Ford underwent a complete restoration led by Vice President Joe Woyjeck. It was on display at Artesia’s Old Station 30, but now is located in our Shop facility.

The Museum used it as a hose wagon for competitions, called musters, across the state of California. It was also used as a tow vehicle. It has been sitting behind Station 54 for the last couple of years and it deteriorated badly over those few years.

In June 2010, it was brought over to the Museum and Joe Woyjeck disassembled the vehicle to close to a frame off restoration. It actually was a fire engine, it had a pump and a water tank. But all of that had been removed either by Arco, or Shell, or the Museum back in the ’80s, we are still looking into who did that modification. 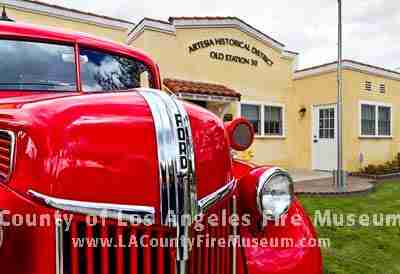 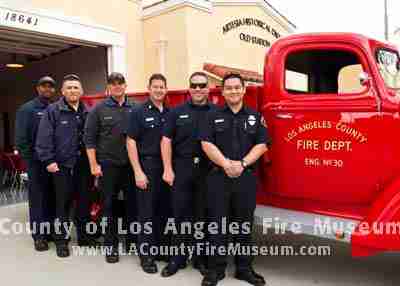 Thank you Jerry Roberts for your generous donation towards the towing bill to bring the new acquisition of a 1968 Crown to the Museum from Arizona.

This photo was taken on November 7, 2010. Engine 144 drove 5 miles to the Chino Valley Fire headquarters and drove up onto the flatbed by itself! OK, there was a driver behind the wheel…

E144 then took off down I-40 and Route 66 to end up at California Seagrave for some work to be done. 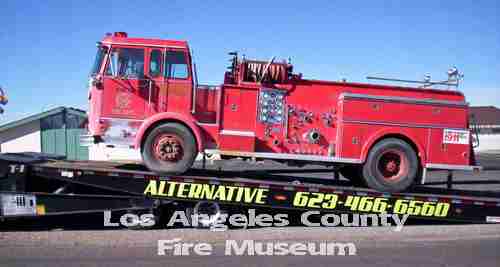 Retired Battalion Chief Michael Singer donated a 1926 American LaFrance Type 45 fire engine to the Museum. His firefighter buddies were quite surprised by his donation . According to one source, who declined to be identified here… “Wow, he finally stopped driving it to incidents!” We thank Chief Singer for getting his kicks utilizing other resources so that all of you may enjoy this beauty. 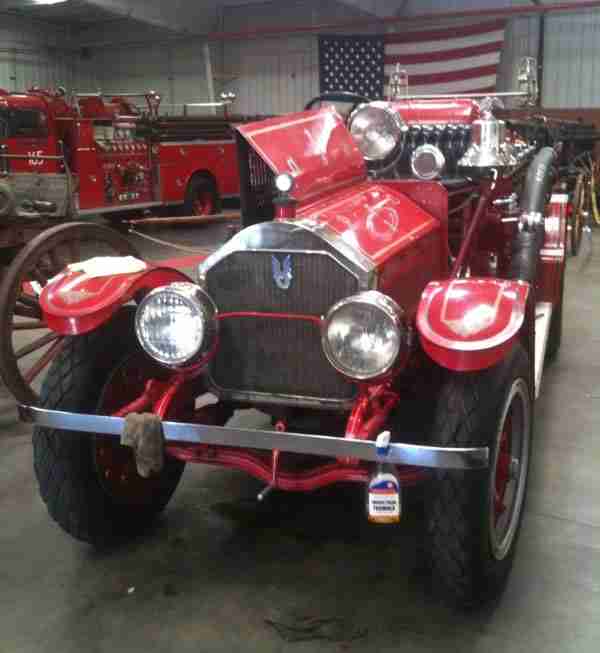 The Henning Family donated a very coveted Forker helmet to the Museum in October of 2009. It has Engine Co. 43 painted over Engine Co. 22. EARLY 1900’s

“This helmet was found in the garage when we moved into our South El Monte house in early January 1957. Dad, Bernie Henninges, was a firefighter for the Los Angeles County Fire Department, hired in 1947 soon after being discharged from the Navy in World War II. He retired in 1975 as an Engineer. Dad had bought this house from another LA County Firefighter, Osmand Stevens, Captain Stevens at the time.”

The helmet seems to have quite a bit of history with a second coat of paint. The original shows that it came from Engine 22 prior to being painted. You can see 22’s number outlined behind 43’s. At the time, District 22 was discontinued because the area became a city. It was re-stenciled with Engine 43. The district was east of El Monte, at Five Points.

“It is believed this was worn by Firefighter Stevens when this style of helmet was retired from service and before Five Points became part of the City of El Monte. As children, my four brothers and I often played fireman using this helmet. After I became a firefighter for Central Pierce Fire and Rescue, in Pierce County, Washington, I asked Dad about the helmet. After rummaging through the shed, he brought the old helmet out and he gave it to me. For years, my children would play with this same helmet. It has seen more years of service in the Hennings Family, than it saw in the fire service!

My brothers and I would like to donate this helmet to the County of Los Angeles Fire Museum on behalf of our father, Bernard Andrew Hennings, for his years of service in the Department.”

The District 22 that was mentioned in the letter relates to the early 1920’s Los Angeles County Station 22 in in the city of Gardena. It was called MonitaHelmet 43 Gardena Fire Protection District. Once the city of Gardena was formed, Station 22 became a Gardena City fire station. The number 22 would again appear in the East Los Angeles area of Belvedere Gardens. So this helmet would have served either in the Monita Gardena Fire District or the East Los Angeles District.

It was more likely that it served in the East Los Angeles District, because the Monita Gardena District existed very early in our District history, and it is not believed the Forker helmets were produced during that period of time. We are continuing to research this fact.

Station 22, in East Los Angeles, is still in service today, being one of the oldest Los Angeles County Fire Stations in continuous service.

Forker helmets are very rare, they are always something the Museum is on the lookout for to enhance our collection. We are very happy and grateful to the Henning’s Family for thinking of us, and donating this piece of Department history back to us to share with all of you. 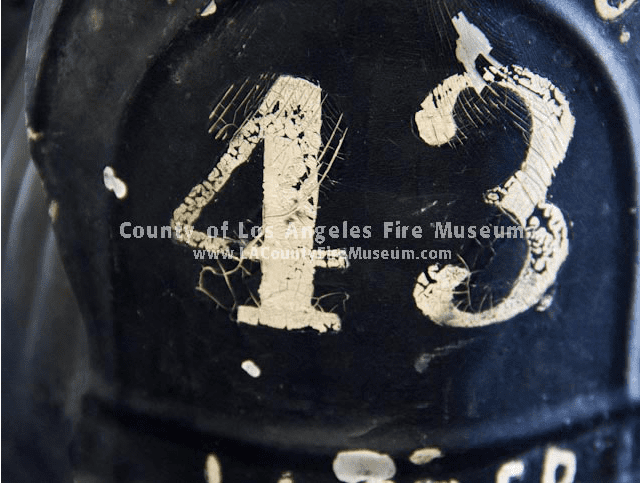 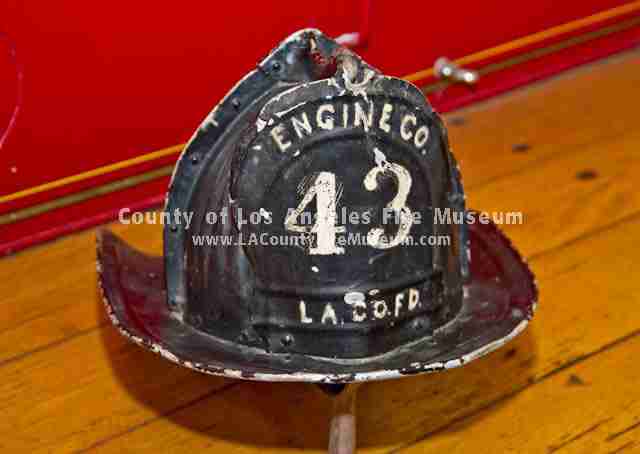 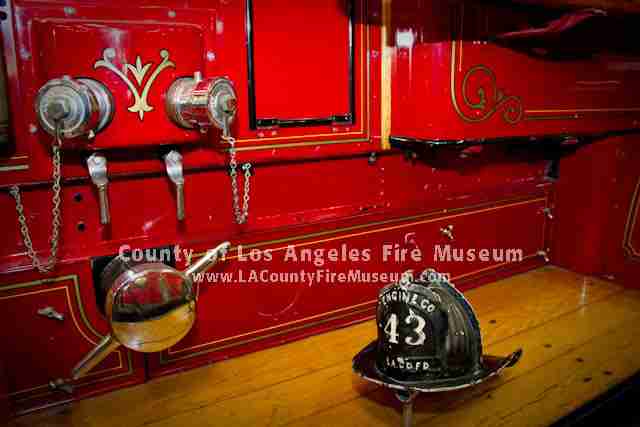 In 2003, the Estate of Ward Kimball shared extremely valuable apparatus with the Museum.

The estate of Disney animator, Ward Kimball, donated his 1888 Silsby Steam Engine, and his 1916 American LeFrance Fire Engine (motorized pumper – aka: the Disneyland Fire Engine) to the Museum. Both apparatus are extremely popular at the Museum. The Silsby is one of our most coveted apparatus in the collection. It is in excellent condition, thanks to Ward’s impeccable stewardship for so many years.

The Disneyland Fire Engine ran around the park for years with the Firehouse 5 Dixieland Jazz band on board.

1888 SILSBY STEAM ENGINE
Under the care of President Paul Schneider 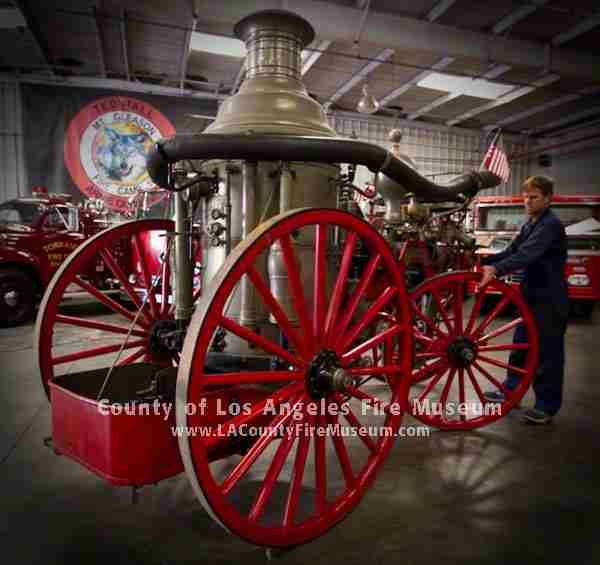 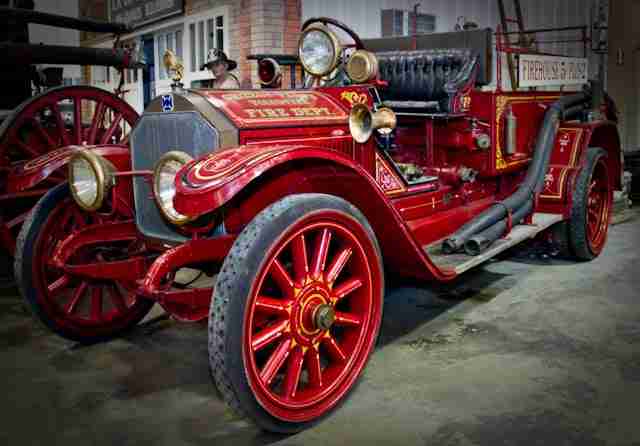 Patrick Henry, family of Fire Warden O.M. Thurston (his grandmother’s second husband!), donated a very pertinent collection of memorabilia belonging to “Thirsty” as he served Southern California wildlands. Here is a statement from a newspaper clipping on his retirement:

On December 1, 1951, O.M. Thurston retired from the position of Assistant County Fire Warden with the Department of Forester and Fire Warden. “Thirsty entered service with the old Forestry Department on January 10,1921 when it was composed of a handful of men, a Model T Ford, and a motorcycle. He has seen it grow to its present strength of more than 1,000 men…

This collection, which includes photographs of the look-out stations in Malibu and the “new” forestry patrol station in the Santa Monica Mountains, was found in an attic in Sequim, Washington, and was about to be discarded. Patrick then thought about the Museum, and decided to see if we would be interested. To think that the importance of what we found in this collection was almost lost, is unthinkable! THANK YOU… for stopping and saving our history!

The collection also shows the importance that hunting and fishing carried in our local mountains. There are photos and stories showing a collection of wild life existing nearby that we have not seen in years.

Patrick’s mother was also part of our Los Angeles County Fire Department. Her name was Dora Rorison, and she was a dispatcher at a “fire station that she called headquarters” some place between Ventura County and Calabasas.

A through digital display of this collection will be available soon, as well as a biography on Fire Warden Thurston. In the photo below, Fire Warden O.M. Thurston is squatting on the left. 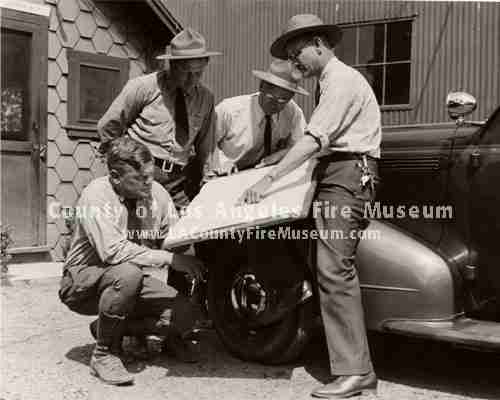 Fire Warden O. M. Thurston is kneeling on the left

Thanks to the Kirby family for their generosity and donation.

This 1930 Seagrave was donated to the museum by the Kirby family. It is scheduled for restoration in the near future. Plans call for installation of modern power (460 cubic inch Ford V-8), automatic transmission and improved brakes. After being made safe and roadworthy, this Seagrave will then be available for parades and other events in keeping with the Museum Association’s purposes. 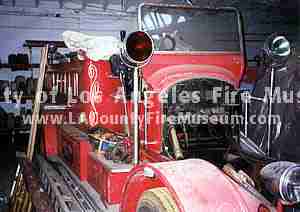 Thank you Clyde A. Bragdon for your generous  donation.

LA County Fire Chief Clyde A. Bragdon donated his document and photo collection to the Museum. In well kept binders, filed by date, the Chief kept press articles and photos on the events and incidents that occurred while he was the Department’s Chief. They provide a through story on the events of the day. Many of the photos and stories have been highlighted in our Fire Warden Issues. 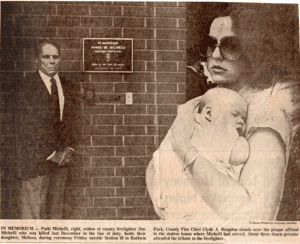 An example of one of the newspaper clippings from the Chief Bragdon collection. See the story on the loss of Brother James W. Michelli for more on this article.